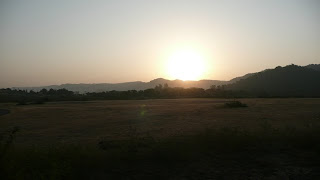 After spending such a great couple of days in Udaipur, we were pretty bummed to leave. However, we'd definitely been looking forward to Ranthambore Park and the prospect of seeing tigers in the wild.

We’d been told that we did not need to book our tiger safari ahead of time and that we should just wait to do it through our hotel. In fact, when we pushed a little, we were told that you could not book it ahead of time (something having to do with monopolies in the travel agency biz and Thomas Cook…). Needless to say, when hotel reception told us that we needed to have booked a jeep at least a week ahead of time, we were a little peeved. He did tell us, however, that if we booked right now, he could get us onto a canter for the next day’s early morning game drive. What’s a canter? A huge diesel truck that seats about 25 people. Sign us up!

After booking our safari, we quickly discovered that there is nothing to do in Ranthambore except shopping, tiger safaris, and hanging out at your hotel. We settled into our books and ate a mediocre buffet dinner in the garden.
The next morning, Yann was *really* excited to get up at 4:45 AM. We ate a quick breakfast and waited for our canter. It finally arrived after about thirty minutes. Does this look like a stealthy vehicle for sneaking up on tigers? We thought so, too. 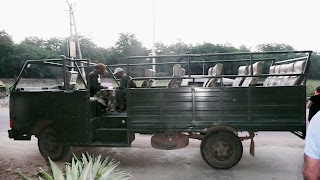 We spent the next forty-five minutes driving around to the hotels and gathering additional passengers. Finally, we were off to the park! 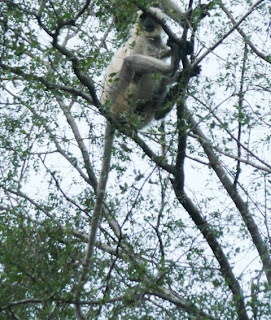 We quickly spotted some deer. And some birds. Then the guide saw a monkey in the trees overhanging the road. The driver didn’t stop, but continued ahead. Surely he wasn’t going to stop directly under it? Nope, he kept driving right on through and stopped on the other side, even once the monkey started peeing! I was lucky only to catch a couple of drops, but the guy diagonally in front of me got pretty doused. Jealous, Lindsay?

[When Lindsay and I were walking through the hanging bridges in Arenal, Costa Rica, our guide told us never to stand directly under monkeys (especially with an open mouth) since you never know when they will decide to relieve themselves. Lindsay quickly decided that being peed on by a monkey would be *so cool*…until we heard some sort of liquid falling through the leaves and she hightailed it out of there.] 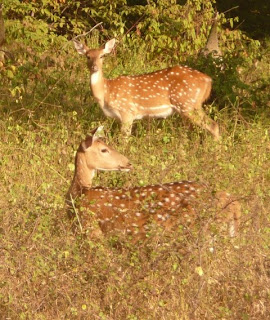 The next two hours were filled with sightings of peacocks, deer, spotted deer, more peacocks, unspotted deer, big deer, little deer, other birds, peacocks, and about half of a small crocodile really far away from the canter. Of course it wasn’t really that surprising that we didn’t see anything very interesting: we were the last in a train of about thirty vehicles and every time we passed one headed back in the opposite direction, they reported that they had seen nothing. This was a far cry from safari in East Africa!

As we were leaving the park, we heard that someone had seen a tiger in a different area. We quickly headed in that direction, but by the time we got there, it was gone.

Well, it was about that time, so we headed out of there, reversing the order of the morning’s pick-ups, so Yann and I were the last drop-off. Maybe especially since we’d had such good luck on safari in Kenya, we decided we didn’t really care to spend another few hours that afternoon tiger-hunting in a huge, yet amazingly uncomfortable vehicle. We settled back into our books for the afternoon.

That night at dinner, I think we may have been the only people who hadn’t seen *at least* one tiger earlier in the day. Most people had seen two or more! 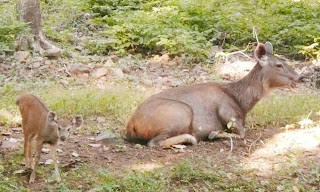 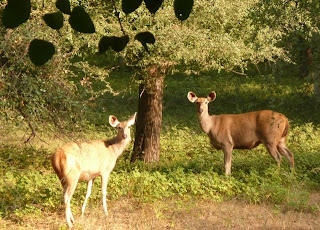 Posted by Catherine at 2:33 AM