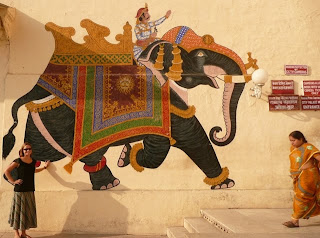 We arrived in Udaipur still a little star struck from the beauty of the Jain Temple. As we pulled into town I pulled out the LP to read my 15 minute crash course in Udaipur’s history. We had heard a lot about the “Floating Palace Hotel” that was located here and I was delighted when the LP confirmed my suspicion that this was the same palace/building that was in the James Bond movie “Octopussy!” I saw that movie in the theatre with my dad and grandfather sometime in the eighties and though that was the coolest evil villian lair I had ever seen! We had actually asked about staying in that hotel until we informed the price tag was $1200/night—ouch! 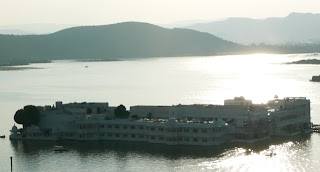 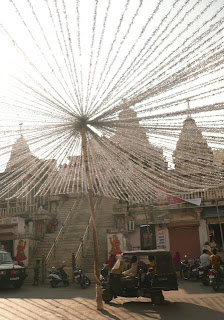 It turned out our hotel was actually really neat and just a short walk to the city sights and a clear view of the floating palace. The decorations were really cool and each of the windows had a small balcony laden with pillows, but more importantly, they had WIFI! Surat wasn’t going to meet us until 4pm the next day so we had all kinds of time to explore on our own. We quickly agreed to call and make arrangements for the two activities we had read about and wanted to enjoy while we were in town: yoga and cooking classes. A few phone calls later we had sorted out our schedule and were quickly getting dressed to make a 6pm yoga class. I thought the class was great because it went slow enough that I could actually figure out what the hell was going on. I think Catherine even enjoyed although it was probably several notches below her level of expertise. After class we dropped into a couple of shops we had seen on the way to class that advertised silk sleeping bags (basically bed condoms for dirty hotel sheets) and picked out the fabrics we wanted. During the conversation we also saw some clothing we really liked and discovered it was really cheap to pick whatever fabric we wanted and have some clothes made. After being measured and $20 lighter, we both had three custom pieces of clothing that would be available for pick up the following evening. Exhausted of shopping we decided to make our way to dinner. We found a table in an open garden restaurant amongst a packed house. Sipping fresh lime sodas and nibbling on spicy veggie curries we admired our view of the well lit “Floating Palace” just a few hundred meters offshore. 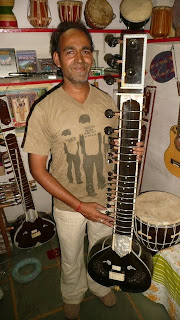 Everything about Udaipur seemed to be cool and laid back. We were determined to get as much of it in as we could and pulled ourselves from bed early the next morning to go back and get in another yoga class. After yoga, we showered and ate breakfast and then began walking down the long row of shops that lead to the lake’s edge. We stumbled upon a small shop with a couple of sitars in the window and ducked inside to see if we could find one for Steve. He had made the request while we were in Madagascar and I had been looking since we arrived in India. It turned out that the shop keeper was actually a musician who also made sitars. After a few demonstrations and discussing logistics Steve became the owner of a new sitar which would take about a week to arrive in Nashville.

We were starved and had to run a few errands before we would meet back at the music shop and speak with the guy who was going to ship the instrument. We found a café and were seated next to a couple of Americans. They were really nice and we were all too happy to swap stories about India, traveling, work, etc. Two hours later we made our way back to the instrument shop and finalized our transaction. It was getting late in the day, we still hadn’t seen any “sights,” and had yet to pick up our cool new custom sleeping bags. We decided to make quick work at the tailor and get on to the Palace Museum as quickly as possible. At 4:00pm we had tickets to the museum and asked our newly hired guide to make the tour 1 hour. It was after 5:00pm and we still hadn’t finished the tour (which by the way paled in comparison to everything else we had seen and done in Udaipur) and we finally told our guide that we had to go. The coolest thing the place had going for it was the old elephant tug-o-war events held in the courtyard. Elephant fights or not, now it was time to round out our day in cooking class. 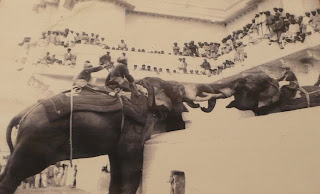 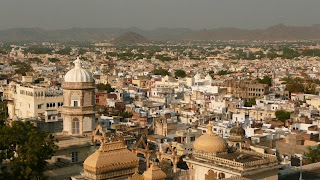