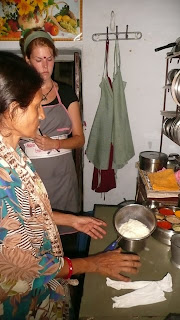 Before she started our cooking class, our instructor gave us a little intro. She told us about what we would be cooking and that she only made vegetarian food (although her recipes contained several variations with meat). She also told us her story and how she started teaching cooking classes.

About nine years ago, her husband passed away suddenly, leaving her alone with two boys, aged seven and nine years. She had never worked, her husband had left them with nothing, and she was not allowed to remarry. However, she had been born into an upper caste of priests and scholars, thus dictating the type of job she could hold. For several years, she did laundry for tourists to make ends meet, but she had to do it secretly. Her caste did not allow for that sort of work.

Her eldest son brought a couple of Australian tourists into her home for dinner about four years ago. At this point, she spoke no English, but the Aussies loved her cooking and told her son that she should teach classes to tourists—that they would love it. To her son, she said absolutely not—she didn’t even speak English! The Aussies insisted that she wouldn’t need to speak much and that she could learn as she went.

She said she was terrified for her first class and left the room in the beginning. However, four years later, her class is going strong. She doesn’t do any of the computer work—tourists have all pitched in with little bits over the years to get her recipes typed up and her website running. Her son manages the email. But she says that during the tourist season, her class is full most nights (she limits the class to four students).

This may sound a little cheesy and/or condescending, but the more we travel, the more lucky I feel about where I was born. I definitely feel this way as a person, but mostly as a woman. The women we see in a lot of countries seem to work so hard for so little benefit, but they also seem very isolated. Don’t get me wrong, the community of women always seems very strong, but that community itself appears very contained. I’m also not trying to discount the value of other cultures—there are certainly things that my culture lacks as a result of the very things that it has gained.

At any rate, I liked her story and was glad to see that she was doing so well for herself. She seemed to really enjoy her interaction with so many different people and it seemed like a far cry from doing laundry on the sly.
Posted by Catherine at 4:11 AM