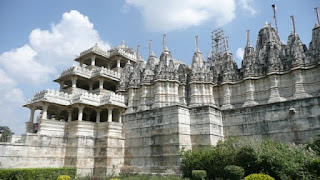 Ranakpur Temple was about 90 km outside of Udaipur. It was the first (and only) Jain temple that we would visit. 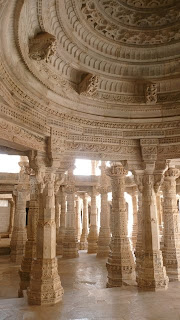 I’m sort of intrigued by Jainism. I don’t know a ton about it and it’s definitely a minority religion in India. Ganjurat, south of Rajasthan, is the state most densely populated with believers and was not on our list of places to visit. The main tenet is to live and let live. They practice “ultra-vegetarianism,” meaning that they only eat food grown above the earth (for example, they don’t eat potatoes) since digging underground could potentially harm insects and other earth-dwellers. They don’t wear leather. The most devout will tie a cloth around their noses and mouths to prevent inhaling insects. They also sweep the ground in front of them to avoid stepping on insects (although I don’t quite understand how sweeping insects isn’t harmful).

To enter the temple, you must remove your shoes, any other leather items, and any intoxicants (like cigarettes). Menstruating women weren’t allowed inside since it is considered unclean. (Although I’m not sure how they identify the offenders.) You must also be modestly dressed and revealing clothing is prohibited. For the first time, Yann had to don extra clothing since he was wearing shorts—HA! 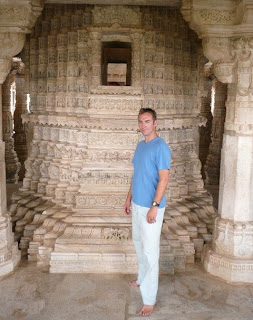 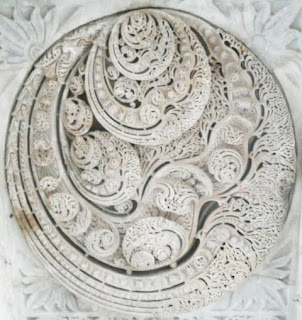 When we entered the temple, a Jain priest asked if we’d like a short tour. We accepted and he proceeded to give us the highlights. It was built from the 12th to 15th century from white marble. The space of the temple was completely symmetrical and made of 29 halls and 1,444 columns. No two of the columns had the same carvings. The prettiest part about it was how intricate all of the carving was.

The only thing I didn’t understand was how this simple religion of “live and let live” managed to rustle up the cash to finance such an architectural feat. Then again, that’s a big part of what I don’t get about most religions, but that’s a separate blog entry. : ) 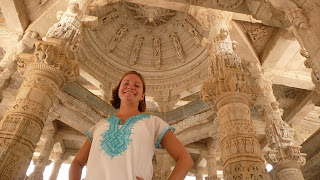 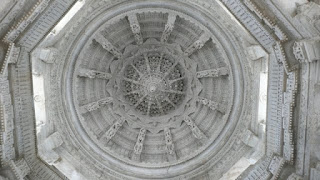 Posted by Catherine at 2:37 PM