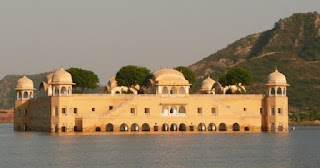 On Wednesday morning, we checked out of our hotel and met up with Surat, our driver. We thought we’d get on the road immediately, but it turned out that we needed to finish some additional paperwork back at Mr. Sharma’s office. About an hour and a half (and a pretty solid attempt to lock us into a tour of Goa and Kerala) later, we were on our way to Jaipur. Surat was pretty quiet, but so were we—a little jet-lagged and a lot shell-shocked.

We arrived in Jaipur around 5 PM. After two welcome Coca Colas and checking into our room (complete with a bouquet of roses and a big show of tossing additional rose petals on our bed), we set off towards the bazaar in the Old City. We wandered around a bit, but it wasn’t really all that exciting. We were both a little listless and not really in the mood for shopping. We did find some street food though—samosas and something similarly vegetarian and fried—pretty delicious. 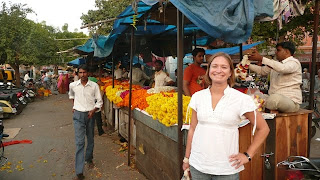 Yann noticed that there were a lot of handmade paper shops around and, since I always carry a notebook that had seen better days, suggested I get a small journal. Fine, shopping, hooray…we had time though, so I acquiesced. After poking our heads into a couple of shops without finding a journal with handmade paper, a man grabbed us and insisted he could find us what we were after. Oh good, we’d never heard *that* before! We followed him into an alley and lo and behold, there was a perfect journal: about 4”x6”, covered in fabric and beads, AND less than $2! The shopkeeper informed me these were local prices, not for tourists. I don’t know whether or not that was actually true, but I do know I haven’t seen a prettier or less expensive notebook.

Since the man had done us a favor, he insisted we do one for him. Um…okay. He sat Yann down with a pad of paper and a pen and dictated a five-page love letter to his girlfriend, Celia, in the UK. He said he would recopy it in his own writing, but wanted to make sure there were no spelling or grammatical errors. I’ll admit I was suspicious the entire time about his motives and definitely doubted this girl’s existence, but, in retrospect, it was a really sweet letter and he didn’t want anything from us afterward except to write down in Hindi the name of a shopping district he’d like us to patronize the following day. I hope Celia got her letter from her romantic and lovelorn shopkeeper.

We’d found a restaurant in the trusty LP that we wanted to check out for dinner, but it turned out that our hotel was way out of town and it would probably take over an hour to get there. We started to get pretty grumpy about the hotel location and considered that it may bode poorly for the rest of the trip. In the end, we decided we were too tired to go out anyway and ordered awful room service instead. 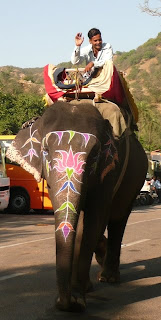 The next morning, we had a “complementary” guide, Muhn, for the day. We started out with an elephant ride. We’d started to feel pretty terrible about how all of the working animals are treated in a lot of places we’ve visited (camels, zebus, horses, and now elephants), but in the end, we decided we shouldn’t pass up the opportunity to ride an elephant. Normally, the elephants follow a route up to the palace. Since the Navaratri festival was underway, however, the elephants just followed an oblong route along the road. For about $20, we rode the elephant for about five minutes…I guess that’s what we get for contributing to animal cruelty! We also started to think about the fact that we were scheduled to go on a camel safari to spend the night in the desert from Jaisalmer in a few days 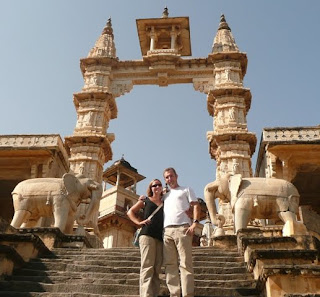 Afterwards, we went to the Jugatshirmoni Temple, the first of many temples on the trip. It was really pretty. Then it was on to City Palace. I’ll be honest; we were bored, didn’t feel like sightseeing, and Muhn was really wearing on my nerves. Luckily, we were headed to the carpet and textile weaving “factory” next—we couldn’t *wait* for the high-pressure sales pitches!

We passed briefly by Hawa Mahal (Wind Palace) on our way to lunch. 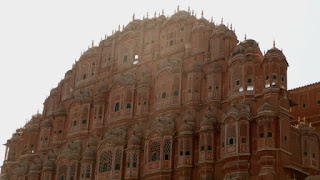 Muhn had offered several times to take us to the jewelry-making “demonstration”. Despite the fact that Jaipur is known for its gemstones, we really didn’t feel like being subjected to more high-pressure sales, so we tried to blow him off. Finally, we got sick of refusing and agreed. Shockingly, the “demonstration” lasted about two minutes and we were then led into the shop.

Finally, we insisted on going to Jantar Mantar. Jantar Mantar was actually really cool. It’s an enormous outdoor observatory that was built in 1728. What look like sculptures are actually large instruments and most of them still function properly.

Throughout the day, Muhn had also offered to take us to have our palms read. I kinda sorta wanted to do it, so we gave in. Of course, the palm reader’s office was in a jewelry shop. After about ten minutes of being shown jewelry, Ajay came out to talk to us. He quickly diagnosed me with several energy blockages that were causing anxiety among many other afflictions. Luckily, he had a stone that he could make into a pendant to wear around my neck that would cure me. Yann was completely fine although he could stand to engage in some additional meditation. Shocking! While most of you know that I’m not exactly laid back, I found it interesting that women tend to shop more, wear more jewelry, and be more prone to insecurity and, in this situation, I was the one who needed to buy something to cure myself! I refused to be drawn into his scheme and laughed him off.

However, as we drove away, I started thinking about Ajay’s diagnosis. Kerry is really into stones’ healing powers and there are plenty of cultures that swear by it as well. There are entire books written on the subject and the beliefs are ancient. I believe in acupuncture, massage, and yoga—why not gemstones? Once we were about a block away, I asked Yann if he thought I was completely stupid if I bought into Ajay’s pitch. He said absolutely not and that, while he was a huge skeptic, if something made me relax, he was all for it. We turned around.

Ajay told me that his shop would make the star ruby pendant and he, as the healer, would need to perform a ritual on it. After that, no one but me could touch it. I would put it away for 15 days and then perform my own ceremony on it, wear it, and keep it under my pillow at night. I would not allow anyone else to touch it. I balked at the price. He quickly told me that was the price for a gold setting and showed me the price for silver. I balked at that internally as well, but figured you don’t bargain with the man who is supposed to be curing your major faults. I walked out feeling slightly duped, but slightly hopeful.

And I’m sure Muhn ended the day with a hefty commission.
Posted by Catherine at 5:26 AM