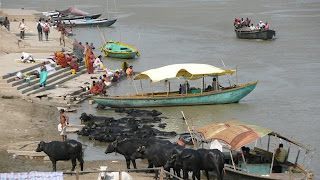 Everything we’d heard about Varanasi was lukewarm at best—-along the lines of “it’s interesting, but a little chaotic...” Even the LP’s first sentence describing the city was “brace yourself”. Between that and the overnight train ride, I was feeling very anxious about our trip. The main consolation was that after we made it through the next four days, we’d be on our way to Goa to chill out and have no schedule until we felt like it again.

Surat dropped us off at the train station a couple of hours early since he had to drive all the way back to Delhi that night. We paid someone 100 rupees to make sure we got on the right train—-it may have been the wimpy way out, but with little in the way of information inside, we figured the two bucks was worth it. Hanging out at the train station only heightened my trepidation as we watched the rats scurry around and listened to the world’s loudest pigeons. 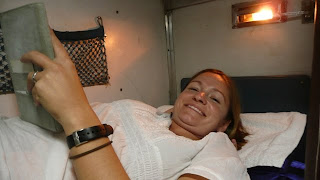 [Allegedly, this is the only picture of the train. For the record, I do *not* have a double chin.]

Finally, our train arrived (right on time, I might add) and our hired guy made sure we got on it. It was an interesting set-up. All of the trains we’d been on thus far had been locked compartments of either two or four bunks. On this train, all of the bunks were out in the open with curtains that you could pull closed. Luckily, it was already 8:00 PM, so by the time we got settled and exchanged a few pleasantries with the men in the bunks across from us, I was able to crawl up on the top bunk, read for a bit, and go to sleep in the very hairy sheets provided by the railway. I vaguely heard Yann discussing politics as I drifted off.

[If one thing recurs over and over in our travels, it’s how ecstatic the rest of the world was for our change of administration. As uncomfortable as it can be at times traveling as an American, I can’t imagine how much worse it was under the reign of terror.]

We were supposed to arrive in Varanasi at 6:15 AM. Around 5:45, the guys across from us told us that the next stop was Varanasi. How exactly they knew, I’m not sure-—there were no announcements or anything. We quickly gathered our bags and headed out with everyone else.

Immediately outside of the train, a young guy held a sign with Yann’s name. He quickly introduced himself as Rahul and led us to the car. After checking into our hotel room, we made arrangements to meet him after lunch.

We spent the next 30 or so minutes arguing with the hotel. Our first room wasn't made up. There was an open packet of toothpaste and hairy soap on the edge of the sink and yesterday’s newspaper on the nightstand. The next room had two twin beds. They didn’t even pretend the next room was made up and told us we could have it at 10:00 AM. I told Yann we should just take the room with two twins so we could shower and have a quick nap now, when magically a made-up room with a queen became available. We moved our stuff in there and I tried not to make too huge of a fuss about it…it was definitely the grossest room we’d stayed in so far and the posted rate on this room was $100/night. We slept in our sleeping bag liners. : ) 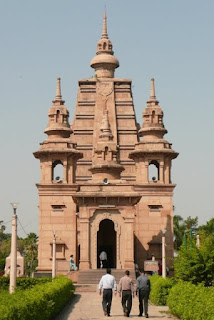 After showers, naps, and lunch, we were ready to tackle Sarnath with Rahul. Sarnath is where Buddha preached his first sermon after achieving enlightenment. As Buddhism flourished, there were elaborate and huge monuments and monasteries for at least seven centuries until Muslim invaders destroyed the city. The ruins were rediscovered by British archaeologists in 1835. 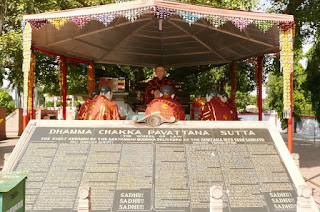 First, we visited the Mulgandha Kuti Vihar temple where Buddha’s first sermon is chanted daily. It was a really pretty temple painted inside with Buddhist scenes. However, Yann and I didn't like our tour guide--Rahul was about 20, really enthusiastic, and royally grating on our nerves. Luckily, when we went over to the Dhamekh Stupa and monastery ruins afterwards, he let us wander around by ourselves. Here’s a picture of my feelings on sight-seeing at that point: 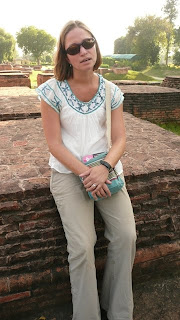 After that, Rahul presented us with two local tickets (5 rupees apiece instead of 50) into the archaeological museum.

We headed back into town so that we could arrange for a sunset boat ride along the ghats. Ghats are the long stairways leading down to the Ganges River. They line the west bank of the river for about three km or so. Most of them are sites for pilgrims to bathe in the sacred river. However, some of them are used for public cremation. 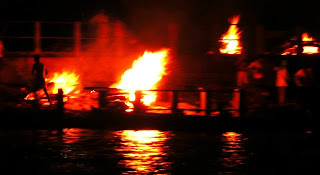 Once Rahul had secured our vessel, we climbed aboard and headed up the river toward Manikarnika Ghat—-the main burning ghat and supposedly the most auspicious location for a Hindu to be cremated. At this point, it was mostly dark, and we could see the fires from a ways off. The fires burn 24/7 as people bring their loved ones, wrapped in golden shrouds, to be washed in the sacred river and then cremated at its edge. Rahul told us that it takes 300 kg of wood and three hours to burn a body. I’m not sure we believed him. However, it was quite a sight to behold: we were really very close and it smelled of burning flesh. We also saw random body parts sticking out of the fire. Very interesting and a little eerie. 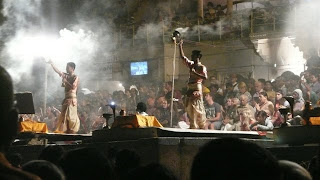 We headed back down the river to Dasaswamedh Ghat, where the ganga aarti ceremony is performed daily at 7 PM. The ceremony is to worship the river and is full of chanting, incense, fire, dance, and prayer. The ceremony was pretty spectacular despite Rahul’s incessant chatter and the fact that we were bumping against about fifty other boats. 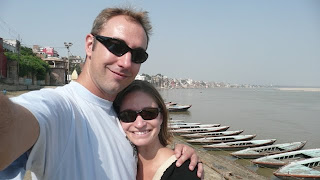 The next morning, we woke up psyched—-a whole day to ourselves! After a leisurely breakfast, we found a rickshaw to take us to the ghats (we were staying near the train station and about thirty minutes from anything worth seeing). We instructed our driver to take us to Assi Ghat, the southernmost of the main ghats. We then planned to meander our way up the river and into the old city. I was slightly nervous—-apparently Varanasi rickshaw drivers are notorious for taking you to shops, restaurants, etc. where they will receive commissions rather than where we actually want to go. Our guy was good though and we jotted his number down so we could call him when we wanted to head back. 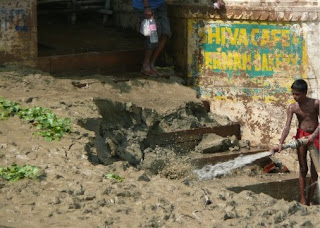 I’m not sure if it was the gorgeous day or the sense of freedom in not being “on a tour”, but we had a really lovely day wandering up the river, around the ghats and the back streets, and around the old city. Despite the fact that the river is pretty polluted, the scenery was pretty and interesting, and, yes, we did get mildly hassled by people wanting to take us to their shops, but nothing any worse than anywhere else we’d been. A kid of about eleven, Deepak, hung out with us for a while and I was honestly sad to see him go once he got run off by an older tout. We managed to find a pretty touristy restaurant for a couple of veggie burgers and iced teas (despite the fact that we have most consistently enjoyed the food in India, we do occasionally need a break from all of the lentils and cauliflower) and a couple of sweet shops. We both love the sweets in India—-they are only a couple of bites each, so you can sample a few at a time!

I tried to do some shopping afterwards, but just wasn’t in the mood (shocking), so we wandered around, taking in all of the colors and the sights. Late in the afternoon, we headed back to our hotel to shower and find somewhere close by for dinner. Unfortunately, our driver from the morning wasn’t answering our call, but we managed to find another driver who took us straight back again. 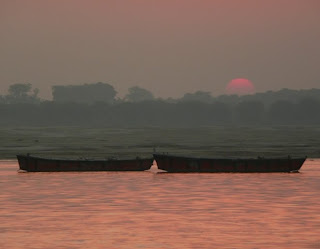 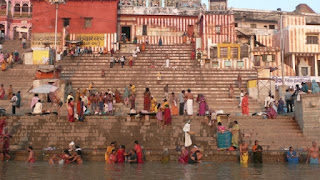 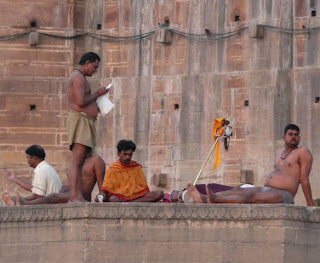 The next morning, we were supposed to take a sunrise boat ride down the Ganges. Rahul met us in the lobby at 5:15 AM with another guide, also Rahul. He explained that he needed to pick up another couple and would meet us at the river. Later, it turned out that he’d pawned us off on Rahul II who said it was his first day as a guide and he was “so scared”. The whole thing was weird and silly, but the bonus was that Rahul II didn’t talk *nearly* as much as Rahul I.

The boat ride was very nice. We left from Dasaswamedh Ghat, the scene of the aarti ceremony from two nights before, and were rowed down close to Assi Ghat, where we’d started our walk the previous morning. Mainly, it was just a peaceful scene, but there were definitely a ton boats out and a ton of people bathing—-I felt a little bit like a voyeur. 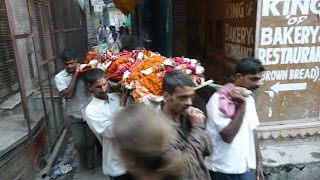 We got off the boat a little north of the main burning ghat. We met back up with Rahul I and a very nice, if a little seemingly shell-shocked, Indian-Canadian couple. We wound through the back streets to get to the Golden Temple, which is an important Hindu pilgrimage site. Rahul I introduced us to the priest who would take us there. Yann and I would not be allowed to go in since we are not Hindi (I’m not sure if the Canadian couple was either, but skin color seemed to go a long way on such subjects). We were a little confused and I think the priest thought we were mad that we wouldn’t be allowed inside. He quickly relented and said that it was okay, we could go inside. We just needed to say that we believed in the Hindu religion and that we prayed to the Lord Shiva every day. That seemed a little wrong, disingenuous, and disrespectful, so we told him that we’d just wait outside. You couldn't really see much from the outside, but the top of the temple was supposedly made of solid gold. 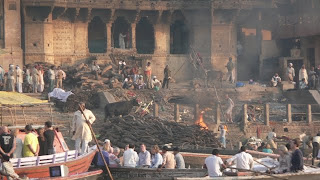 That afternoon, we met back up with Rahul II for a few hours before we needed to catch our train. First, we went to the Bharat Mata Temple, where there is a cool marble relief map of India and the bordering countries. I’m not sure how Yann got on the subject, but the guy at the souvenir counter wanted to buy his iPhone for about $500. He was quite insistent—-we probably spoke to him for about ten or fifteen minutes. 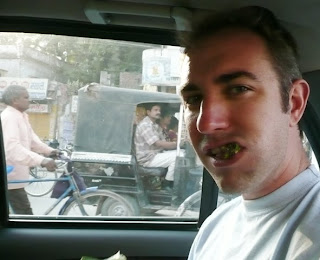 Then we drove through Benares Hindu University. It was pretty and not much different from college campuses back home. Our driver and Rahul II were both very insistent that we needed to try paan to round out our Varanasi experience before we left. Paan is a digestive and mouth freshener made of betul nut (which is mildly narcotic), lime paste, and spices wrapped in a paan leaf. The idea is to stick it in your mouth and chew it, letting the mixture ooze into your mouth. I wasn’t up for it, but Yann agreed to try it. The look on his face when he bit down on it was priceless!

Then we were off to the train station to board the most roach-infested car that ever existed. That may have been it for our Indian train experience! However, it was definitely well worth it to see Varanasi—-one of our favorite stops on our trip. 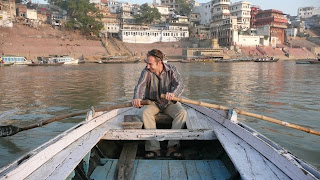 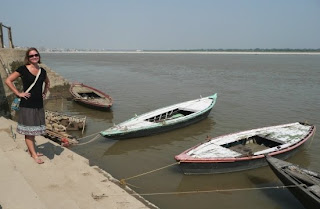 Posted by Catherine at 3:07 AM